As noted in an earlier post, there’s a ton of material to learn about JavaScript, and my approach to mastering it is first to rely on experienced, talented developers to point me in the right direction. In learning React.js, I quickly encountered references to “awesome React” as a resource, and I concur, it is awesome — 700 links to React resources, divided into 72 categories.

However, while it is massive and comprehensive it is also an unvariegated listing. So as I have begun to explore what each link offers, I am adding here some contextual information to the ur-source.

That means this list — like two previous ones I’ve posted on JavaScript and es6 (aka es2015) — is a re-presentation of someone else’s link list. The “awesome React” list was compiled by the relentless Nick Raienko, who continues to update it.

I have not altered the original list (each link of which is usually characterized only by a single short phrase) except to provide visuals for many links, quote a self-description or summary from the site itself, identify authors when possible and cite some of the GitHub or npm metadata. Any non-quoted description that I myself have added appears in italics and/or within square brackets. (Btw, I’m doing this gradually, so for now only a few of those 700 links are fleshed out.)

A collection of awesome things regarding React ecosystem.

Categories that the listings are arranged in: 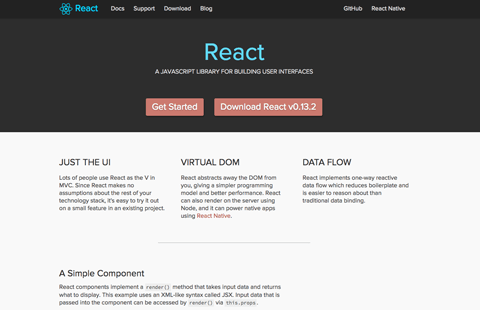 Lots of people use React as the V in MVC. Since React makes no assumptions about the rest of your technology stack, it’s easy to try it out on a small feature in an existing project. React abstracts away the DOM from you, giving a simpler programming model and better performance. 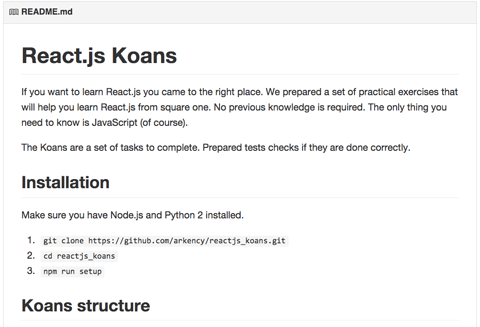 Practical exercises that will help you learn React.js from square one
21 contributors star: 2,111 fork: 112 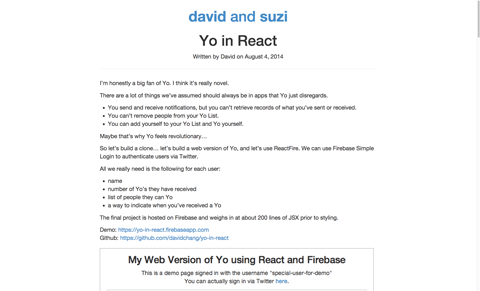 “So let’s build a clone [of Yo]… let’s build a web version of Yo, and let’s use ReactFire. We can use Firebase Simple Login to authenticate users via Twitter.

“The final project is hosted on Firebase and weighs in at about 200 lines of JSX prior to styling.”
By David Chang. Published at ‘david and suzi’ on August 4, 2014 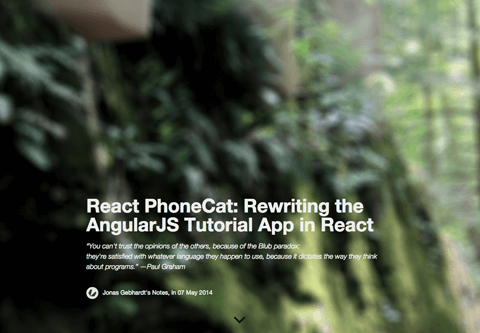 “[H]ere is my … walkthrough of rewriting Angular PhoneCat in React. …

“[This] React version contains 40% more lines of code [than the Angular original]. I’m certain that both the Angular and React versions could have been written more or less succinctly, but succinctness is a non-goal.

Building a board game with React.js 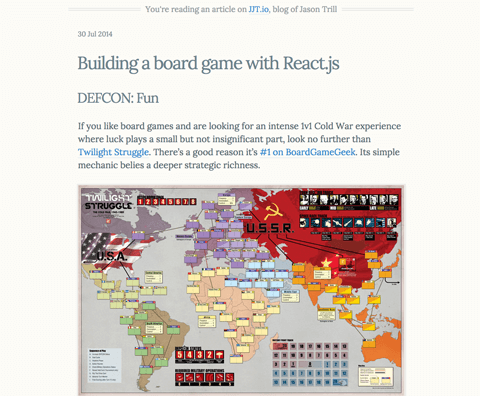 “I started thinking about how to optimize the board layout [of Twilight Stuggle] for a smaller screen, which then quickly spiralled out of control into building a playable virtual board because hey, I’m that kind of nerd.

“The tool of choice for such an undertaking? React, with a router and other libs of sundry to glue everything together.”
By Jason Trill. Posted on July 30, 2014

Trying Out ReactJS With the Marvel API 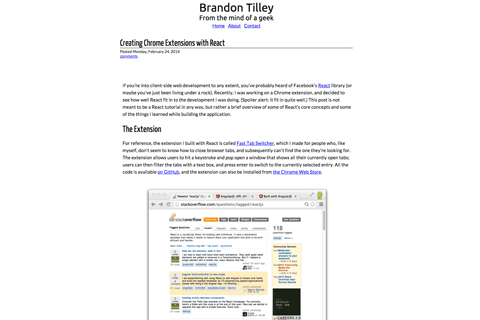 “Recently, I was working on a Chrome extension, and decided to see how well React fit in to the development I was doing. (Spoiler alert: it fit in quite well.) This post is not meant to be a React tutorial in any way, but rather a brief overview of some of React’s core concepts and some of the things I learned while building the application.”
By Brandon Tilley. Posted on February 24, 2014

Using ReactJS and KendoUI Together 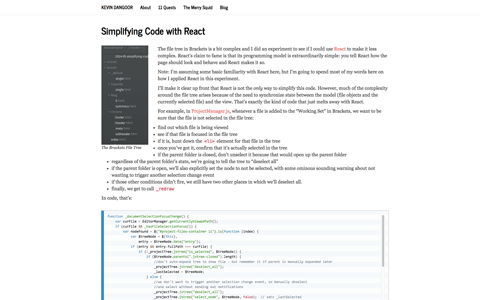 “The file tree in Brackets is a bit complex and I did an experiment to see if I could use React to make it less complex. React’s claim to fame is that its programming model is extraordinarily simple: you tell React how the page should look and behave and React makes it so.

“Note: I’m assuming some basic familiarity with React here, but I’m going to spend most of my words here on how I applied React in this experiment.

“I’ll make it clear up front that React is not the only way to simplify this code. However, much of the complexity around the file tree arises because of the need to synchronize state between the model (file objects and the currently selected file) and the view. That’s exactly the kind of code that just melts away with React.”
By Kevin Dangoor. Posted May 12, 2014

[Note: A follow-up to this post, The New React-based Brackets Project Tree, was published on September 2, 2014.]

Taking React to the next level: Mixins, Gulp, and Browserify

Getting Started with React

Building a Stateless Rails API with React and Twitter OAuth

Set State in Callbacks in React

Send Props to Children in React

ReactJS: Keep Simple. Everything can be a component!

The Future of Drag and Drop APIs

React.js Introduction For People Who Know Just Enough jQuery To Get By

How do I react? Basics & Building an app from scratch

JSX for the real DOM

Learning React.js: Getting Started and Concepts

Build A Real-Time Twitter Stream with Node and React.js

Getting To Know Flux, the React.js Architecture

Creating A Simple Shopping Cart with React.js and Flux

D3 and React — the future of charting components?

Using React for Faster Renders and Isomosphism in Angular

How can React and Flux help us create better Angular applications?

Achieving Reasonable and Scalable Routing in AngularJS with Flux

A mixin-based design for a React.js Bootstrap component library

The Future of JavaScript MVC Frameworks

The Case for React.js and ClojureScript

A Reagent Framework For Writing SPAs

react-haskell, to be used with Haste ( blog post “link to site”)

Socket.IO integration example inside of a single React component

Server/Client With React, Part 1: Getting Started

Server Side Rendering for ReactJS

AMD and CommonJS examples with Webpack

Direct uploads to S3 with React, Rails, and Paperclip

Why did we build React?

Using React to speed up the Khan Academy question editor

Getting your team to adopt new technology

Pros and Cons of Facebook’s React vs. Web Components

React.js plays nicely with other tools and other thoughts

Why we use React.js in our Rails projects

Removing User Interface Complexity, or Why React is Awesome

Moving From Backbone To React

From Backbone Views To React

React.js and How Does It Fit In With Everything Else?

JavaScript’s History and How it Led To ReactJS

Saving Time and Staying Sane? Pros and Cons of React.js

Why We May Ditch AngularJS For React

Why is React’s js size so big given its small API?

How I Learned to Stop Worrying and Love React

10 reasons to use React in your next project

From Backbone To React: Our Experience Scaling a Web Application

Boiling React Down to a Few Lines of jQuery

Async requests with React.js and Flux

What is the Flux Application Architecture?

The Case for Flux

The Evolution of Flux Frameworks

React with Flux by example — a simple Todo List dissected

FOR FLUX SAKE! — a beginners tutorial

React Starter Kit — a skeleton of an “isomorphic” web application

React.parts — A catalog of React components

griddle — A simple grid component for use with React

react-mediaswitch — Choose your DOM based on media queries

react-frame-component — Render your React app to an iFrame

react-textarea-autosize — Textarea component for React which grows with content

[react-time — Component for React to render relative and/or formatted dates into ](https://github.com/andreypopp/react-time "link to site")

react-crouton — A message component for reactjs

ReactiveElements — Allows to use React.js component as HTML element

react-controlfacades — Style form controls but use their default behavior

react-layers — A library for layering components in React

qrcode.react — A component for use with React

react-stylesheet — A component for React to declare stylesheet dependencies

react-bootstrap-multiselect — A multiselect component for react (with bootstrap)

react-stylePrefixr — A simple utility for React.js to help deal with style vendor prefixes

react-video — React component to load video from Vimeo or Youtube

react-captcha — A react.js reCAPTCHA for Google

react-autolink — An autolink mixin for React

react-emoji — An emoji mixin for React

react-portal — A transportation of (not just) modals and lightboxes to document.body

react-panels — A multipurpose tabbed panel with many features

react-magic — Automatically AJAXify plain HTML with the power of React

react-cursor — Functional state management abstraction for use with Facebook React

Maple.js — Bringing the concept of web-components to React

react-i13n — A performant, scalable and pluggable approach to instrumenting your React application

react-kup — A simple, non-intrusive alternative to jsx for coffeescript

backbone-reaction — React, Backbone and then some

react-topcoat by @arnemart — A collection of React components for Topcoat

jreact — React on server-side Java (with Rhino or Nashorn)

react-with-di — A hacked prototype of React.js with DI

Rewrite the Admin UI of KeystoneJS in React

react-router by @rackt — A complete routing solution for React.js

react-router by @jaredly — An integrated router for react

routr — A component that provides router related functionalities from Yahoo

formjs — A form generator for Reactjs

react-form-builder — A Form Builder for React.js

formsy-react — A form input builder and validator for React JS

cortex — A javascript library for centrally managing data with React

babel-sublime-snippets — Next generation JavaScript and React snippets for Sublime

require-jsx — A require.js plugin that allows you to use JSX files as require.js dependencies

morpheus — The next generation web publishing platform built with reactjs

react-maps — A map component for React

GraphQL Overview — Getting Started with GraphQL and Node.js

graphql-js — A reference implementation of GraphQL for JavaScript

James Pearce: An Introduction to ReactJS — All Things Open 2014

Brenton Simpson: Tweak your page in real time, without leaving the comfort of your editor

Gurdas Nijor: Unlocking the structure of your React applications with the AST

Eric Ferraiuolo: Format data and strings in any language with FormatJS and react-intl

Andrew Rota: The complementarity of React and Web Components

Jafar Husain: Beyond the DOM: How Netflix plans to enhance your television experience

React.js Team: Q&A with the team

Cheng Lou — The State of Animation in React

Mikhail Davydov — Back to Text UI

Elie Rotenberg — Flux over the Wire

ReactJS: Dealing with the Server

jFlux — Going from MVC to FLUX

Keep up with React — BigBinary

react-webpack-cookbook — A cookbook for using Webpack with React JS

wolfenstein3D-react — Wolfenstein with the rendering layer written in React

Your contributions and suggestions are heartily♡ welcome. (✿◠‿◠)